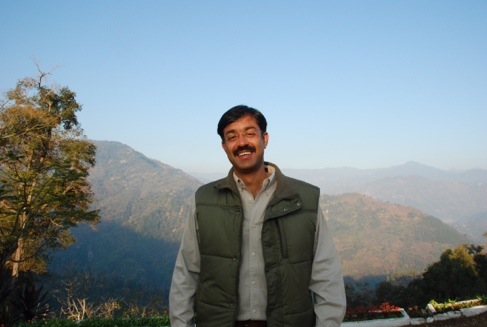 Meet Jai. Happily, he was one of our first discoveries in Darjeeling. Jai is currently a tour guide to wealthy westerners, the trip planner of all trip planners – he regularly travels the length and breadth of India, getting himself into all sorts of hijinks which may appeal to a rich Russian businessman. But Jai used to be many things. Once, he was an elephant driver, another time, a wrestler, he set up a mango orchard at one point, but most impressive of all Jai’s accolades is that he used to bare a 44 inch girth waist, because he loves Indian food so much.

He’s now half the man he used to be, but he generously handed over his top five things to eat, see and do, in the whole of India for our benefit – and here they are:

Jai’s top five things to eat and drink in India

A bit of a misnomer, there’s barely a sniff of tea in Kashmiri tea – it’s made up mainly of spices, milk and sugar. Ordinarily found in Kashmir but I’ve managed to get my hands on some by heading into a Kashmiri carpet shop. They will obligingly offer you a cup if you’re willing to spend 30 minutes while they unfurl 1000 carpets in every shape, size, colour and pattern.

This is what you’ll catch the locals eating – a small disc of fried puffed wholewheat bread served with a small bowl of curry, normally potato and spinach. Only served before 10am – the best stuff can be found in the Kant area.

Goa – where India and Portugal met and cooked up some fish together making Xacuti. A complex dish of many spices with poppy seeds and coconut.

Whilst biryani is popular throughout India, no where beats the Hyderabadi biryani and nowhere in Hyderabad makes it better than Shadab.

And here are Jai’s top 5 things to see and do in India:

1.Trekking on the frozen Zanskar river up in the Himalayas
2.The toy train ride from Kalka to Shimla. While there are a couple of toy train journeys in India, this one has a lot of delightful hair pin bends, 102 tunnels and is a feat of engineering.
3. Riding an elephant in Jaipur. When in Jaipur…
4. Deep sea fishing in Devkar – see if you can find a fisherman to take you in his Dhow boat, a big sail boat previously used by Somali pirates and smugglers.
5. Scuba diving in the Arabian Sea from the Lakshadweep Islands. Take a boat from Kerala to get there.