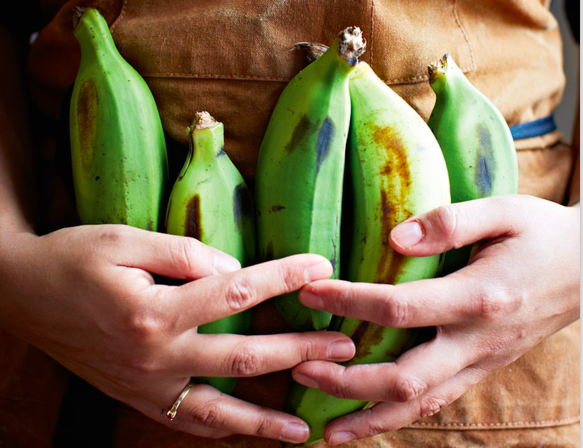 My grandfather wore polished patent shoes, a sharply cut suit and smelt of jasmine, especially behind the ears. He moved from India to Uganda, in the in the 1950’s and built a mini empire, setting up a printing press, a timber yard and a Pepsi Cola bottling factory.

It was all going rather well, and then along came Idi Amin, an unhinged dictator with a penchant for cutting off people’s heads. He expelled my grandparents, my young mother and her brothers out of the country along with all other Ugandan Asians and the family, unexpectedly, ended up in Lincolnshire where he took a job as a lorry driver, transporting steel around gnarly Northern towns.

Every now and then, my grandma or mum would stumble across some plantains in the local Asian grocer and would make this dish for him, from their time in Uganda.

It’s a dish that by its taste and texture is amazingly comforting and rich; a glossy warming, brilliant mash which absorbs any flavours thrown its way. It’s completely transporting and absolutely perfect for these cold winter nights.

Boil some water in a large pan and add the bananas, skin on. Boil them for around 10 mins until they’re nice and tender and you can easily run a knife through them. Take them out, carefully and chop into 4cm long cylinders.

In a lidded pan, heat the oil, then the cumin seeds and peppercorns until you can smell them (around 30 seconds) and then add the onions. Fry them on a medium heat until they turn golden then add the tomatoes. Stir through and pop the lid on for a couple of minutes until the mixture starts to turn darker and hold its own.

Then add the tomato puree, ginger, garlic and chillies. Stir and add the plantain. Cook for a couple of minutes then add the masala; the turmeric and salt and finally, the chopped coriander. Pop the lid back on for a further 5 minutes – then serve with hot chapattis and a generous dollop of greek yoghurt.