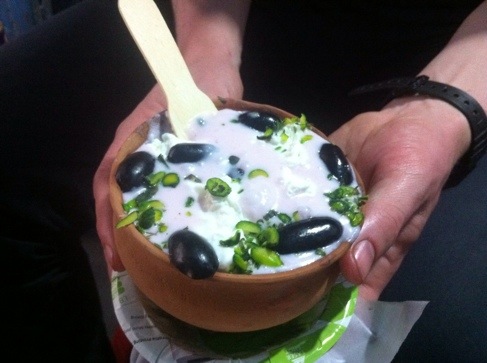 Contrary to what you might believe, i’ve not created this post because lassi and Varanasi rhyme (but yes, it is convenient.)

How Varanasi came to be famous for its lassi’s, I don’t know and no one I asked knew, but my two rupees worth is this. It is one of the the holiest cities on earth for Hindus; to bathe in the river Ganges is said to absolve Hindus of all sins and to die here means salvation from the cycle of re-incarnation.

Being a holy Hindu hotspot, cows are highly revered here. They line the narrow alleyways of the old city and as such, the alleyways are also filled with scenes of some highly skilful cow-dodging and lots of milk shops. It’s not too hard to see how this inspired a crop of some of the best lassi-wallahs this country possesses and how this milk drink came into it’s own here.

You’d be hard pressed to find a better lassi-wallah in the city than Blue Lassi. It’s a hole in the wall joint which has been serving up the same recipes for over 70 years. While many modern lassis are now whizzed up in a blender – Blue Lassi still crushes and macerates fruit by hand with a big wooden stick and in a steel handi. To the fruit they then add home made yoghurt, a little sugar and finally, the creme de la creme – literally, they add the heavenly ‘malai’ cream which forms as a thick layer on the top of the yoghurt before tastefully scattering a few cut baby pistachios and more fruit on top.

While the process has been passed down through the generations, Blue Lassi has wised up to it’s position in the guidebooks of many countries (notably Korea) and expanded its menu to include unusual flavours like chocolate. I tried the black grape which our lassi wallah insisted it was his best recipe – which was mild, creamy, earthy and delicious. The malai added a heavenly texture making it thick enough to eat with a wooden spoon and almost the right consistency to glug – if you’re in the market for an impressive milk moustache.