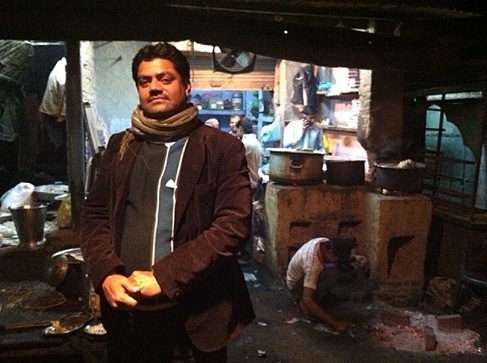 I cannot possibly leave Lucknow without telling you about a couple of very special things we ate there. Yes, Lucknow is famous for Tunday Kebabs, but – did you hear about Lucknow’s famously fragrant biryani, the falling-apart-soft lamb nehari and, oh my, the roomali rotis; chapattis so big and so fine they are named after handkerchiefs?

Let’s start with the biryani. The same Nawabs who enjoyed their fancy clothes and food competitions were also fond of their fragrances. One such fragrance, called screw pine blossom or ‘kewra’ has been adopted for use only in food and predominantly in Lucknow’s biryanis – many say is the secret ingredient to their biryani’s success.

In search of the best biryani in town, I was pointed to Idris Biryani – although their name is nowhere to be found on the roadside shack they peddle their rice from. Before we could take a seat, we were served up a plate of layered saffron rice with a couple of pieces of lamb, but hiding within this seemingly simple dish were some of the tastiest grains to ever have passed my lips (which is saying a lot, if you’re Indian). The rice was bursting with impossible flavour. The lamb was soft too, having been simmered in milk for seven hours, but as no part of the lamb was left un-used, many a gristly but flavoursome bone could be found in the pot.

What makes Mr. Idris’ biryani so special? Well, he has been there, every single day for the last 12 years, perfecting this one recipe (there is nothing else on the menu) which is cooked in just two pots. He cooks on tamarind coal and in a giant copper pot, which he says cooks his biryani evenly and he never uses lamb above 7kgs in weight. Then, suddenly his eyes light up and he scarpers to the back of his shop and pulls out a bottle of 100% pure kewra which smells subtly of bergamot. ‘But this is the magic’ he says.

Now, if you’re interested in the sort of lamb which falls apart when you show it a fork, you might like the nihari. The Muslim community have been eating it for breakfast ‘nihar’ for centuries. We go to Mubeen’s for some where a piece of lamb, like slow cooked shoulder is served submerged in a hearty mustard stew with a flaky pastry like bread known as kulcha. The flavour is rich and pungent. We are told this is because the mustard oil it’s cooked in is fermented for at least 6 months – losing it’s punch but acquiring an elegant flavour.

Walking around the Chowk area in Lucknow, afterwards, we stumble upon roti-wali gali literally called ‘the street with the roti’s’ – where, in the dark, the brightest light comes from a series of 5 or 6 wood fires of street chefs all artfully slapping around rounds of dough so hard they transform into giant soft flat wheels. They throw them onto a burning upturned tava and within seconds beautiful charcoal brown spots appear, turning them into ultra fine, tasty chappatis – which, incidentally, are much harder to make than they look…

One thought on “The hidden gems of Lucknow”